Breastfeeding Group – What to Expect

When the boy was just a few weeks old I was encouraged to attend my local group by the peer supporter that came to see me at home. My first thoughts were no way! Not only am I new to the role of mummy but I’m only just getting the hang of this breastfeeding business (and I’m not too good at that either!) I really didn’t want to go to a room full of people who knew what they were doing to sit there and have them all stare at my breasts when he needed a feed.

I seemed to only be able to feed with a cushion under the boy and using one awkward hand to hold my breast while holding him on with the other. How on earth was I going to do that at a group? I didn’t want people looking at me and my crying baby.

They would all know each other and I would know no one. So a couple more weeks went by and I was getting cabin fever stuck inside, but I certainly wasn’t ready to venture further than round the corner. So I thought about it for a few days and made the decision to give it a try, just the once and if it was awful I’d never have to go back again.

So Tuesday came and I packed myself up knowing it started at 10:30 I tried to feed the boy before leaving, which resulted in me leaving the house late. I debated on the way there if I should just turn around and go home. But I’d not been out for days so carried on walking. It’s not far to the place where it is held – a 15 minute walk. I glanced at the time as I reached the gate, it was now 10:45. I was late. I hate being late to anything. I hurried into the centre and asked the receptionist where I should be going. She told me which room it was in. The doors were closed and the blinds down so I couldn’t even see inside, I pushed the door open nervously and glanced around the room. There were some mats down with blankets and toys, a few chairs laid out and a sofa as well. I gave a nervous smile without making eye contact and walked in. I had only been there about 30 seconds before a lady with a wide smile on her face approached me and introduced herself as a volunteer helper. She asked my name, cooed over the boy for a moment and encouraged me to take a seat. She sat and talked with me for quite a while and my nervousness had gone, without me even realising I was fine in the room full of other breastfeeding mums and I was fine. Thankfully the time went quickly and before I knew it 12 o’clock had arrived and the group was finishing. The boy had slept all the way through, I didn’t even have to feed him, I couldn’t believe it. I walked home and reflected on how grateful I was that the lady had come to talk to me. In my professional life I talk to new people all the time but in my new role of mummy I was a different person!

The next Tuesday seemed to come round quite quickly and I ventured out once more. This time we didn’t have time to feed before leaving the house so I knew I’d have to feed at group. The same helper was there and she greeted me by name. When it was time to feed I asked her about a cushion and as if by magic she produced one. She also sat with me during the feed and gave me some great pointers on position and attachment. I was able to feed for the first time in public! All be it amongst other breastfeeding mums, but it was to me a massive step forward. Perhaps I could leave the house after all? As time went on I kept going back to the group week by week and made some friends there who I am still friends with now. I loved it, it was more of a social group than a support group as I thought it had been before I went. You defiantly didn’t need to have a problem with feeding to attend the group. I went to the group for a year then as I went back to work I had to stop going. I cried at my last time there because I was going to miss everyone. My little baby had grown into a 1-year-old at that group and often when times were hard with being a mummy and I’d consider giving up breastfeeding I’d think about having to leave the group and realise that I didn’t want to so carried on feeding.

After going back to work I explored my options around becoming a helper and being able to give back to other mums the help and encouragement I had been given and found the BfN helper course. I expressed my interest but had to wait quite a while to get a place that suited me and the ability to attend all the course. Finally I was able to attend and I am so glad I did. The course was amazing, I learnt so much about myself and my own listening skills. I really enjoyed every aspect of it. The tutor was such an enthusiastic teacher that the positivity around helping other breastfeeding mummies really shined through for me. I couldn’t wait to get started. I now volunteer each week as a breastfeeding helper at the very group I nearly didn’t go to three and a half years ago. So if you’re reading this now and wondering if you should go along, please do. You’ll more than likely find that there are lots of like-minded mummies there who just like you were unsure at first. You may make some new friends. You may just end up loving it so much that you too want to be a helper too. I’ll be forever grateful to the helper who welcomed me into the group that first time and I hope as a helper myself that I too make people feel welcome, and help them to continue their own breastfeeding journey to fulfil their own feeding choices.

Have you been to a group, were your experiences similar or different? I’d love to know. 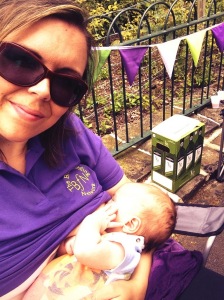 3 thoughts on “Breastfeeding Group – What to Expect”