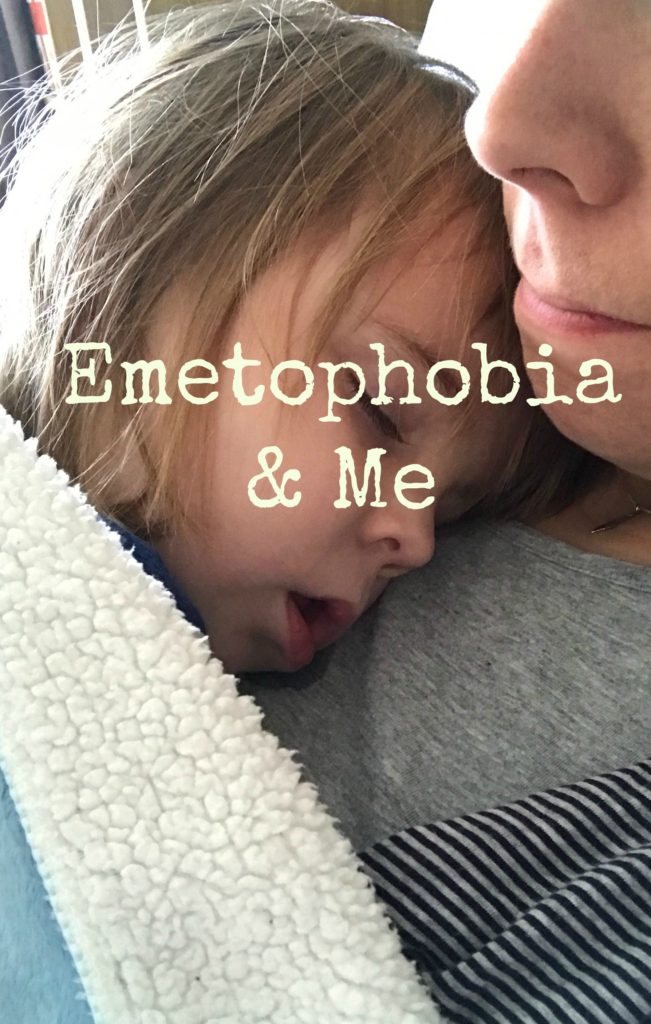 Now before I start properly talking about it I thought I’d mention a trigger warning. Some people with this phobia don’t like to read the ‘v’ word. I am not bothered by it so I will be using it. Everybody’s experience of this phobia is different so I’ll just be talking about me and my experience.

If you’re still reading this I’ll assume you’re ok with reading the word, so welcome and lets move on!

Until about 4 years ago I didn’t even know the word for the phobia I have. I didn’t know it was a thing. I just thought everyone was as scared as I was. Apparently not. My phobia has become far worse since having children. I’m thankfully every day for a husband who doesn’t have the same phobia. He is my rock in the hard times for me.

Emetophobia is essentially a fear of vomiting. People who suffer with emetophobia can have very different fears around vomiting. Not all emetophbics suffer in the same way. So as I talk about it I am describing my person experience, which I know from reading isn’t the same as other people’s experience so please bear that in mind.

Having read a lot about emetophobia it is mostly caused by a childhood experience of vomiting, either by yourself or someone else. I think I know what my experience was but don’t want to type it out on here.

I am scared of the following things. Me vomiting, I am petrified. The children vomiting if theres any chance I can catch it. If I knew they were vomiting for another reason, say a migraine I’m not so bad, but still the underlying fear is there.

The fear of the unknown vomit, that scares me.

I’m scared of other people vomiting if I don’t know the cause. If I know there’s a bug going around and they have mentioned being in anxiety creeps in. If I know they have been sick because they are pregnant or hung over that ok, I can pretty much cope with that.

I’m petrified of someone in our house having a vomiting bug. The anxiety that this causes me is awful. I am lucky in life that not much makes me anxious. I’m blessed to be on the whole a calm and measured person. I’m not a born worrier. I am generally cool about most things except the one thing I can’t control.

I think that’s the worst thing about emetophobia, you can’t avoid it. With most phobias, for example flying or heights you can generally avoid them. You don’t have to fly if you don’t want to (mostly) or go to high places and look down. With emetophobia, you can do lots to minimise the risks but you can’t totally avoid it. Especially when you have children in nursery and schools, there’s no way to control who they mix with or how hygienic it is.

I want to explain what happens with my phobia and what my symptoms are (again these can be different for everyone). When I think that someone in our house is sick or going to be ill then I get almost instant anxiety. Anyone who’s suffered from anxiety will know that symptoms can vary. For me the anxiety manifests itself as my stomach churning over, I feel sick, for an emtophobic this couldn’t get much worse. There’s a knot inside my stomach, which for an emetophobic is the last thing you want, because this then spirals into worry that actually I am also going to be ill.

I try to reason with myself and think about the worst possible thing that could happen. The worst possible thing that could happen is that everyone in the house is poorly (at worst at the same time) and that would mean being ill for maybe 24-48 hours followed by a period of recovery. However my head won’t listen and never sees beyond the illness to the period of recovery. I assume that we will be ill forever, the vomiting will never ever stop, I would be in emetophobia hell. For some reason I can’t rationalise it out in my head. I become petrified. Feeling so guilty that I can barely hug my own children when they are poorly.

I just don’t know how to handle this phobia, I can’t avoid the trigger. It occupies my thoughts a lot. I sometimes wonder if me thinking about it causes it to happen more?

I’d love to hear from anyone also suffers, and even so much more so if you’ve recovered. I know theres a few programmes out there to try and tackle it but I need to know they actually work before I invest my hard earned money. I can not carry on like this though, spending the winter months in a constant state of worry when I’m not with the children.